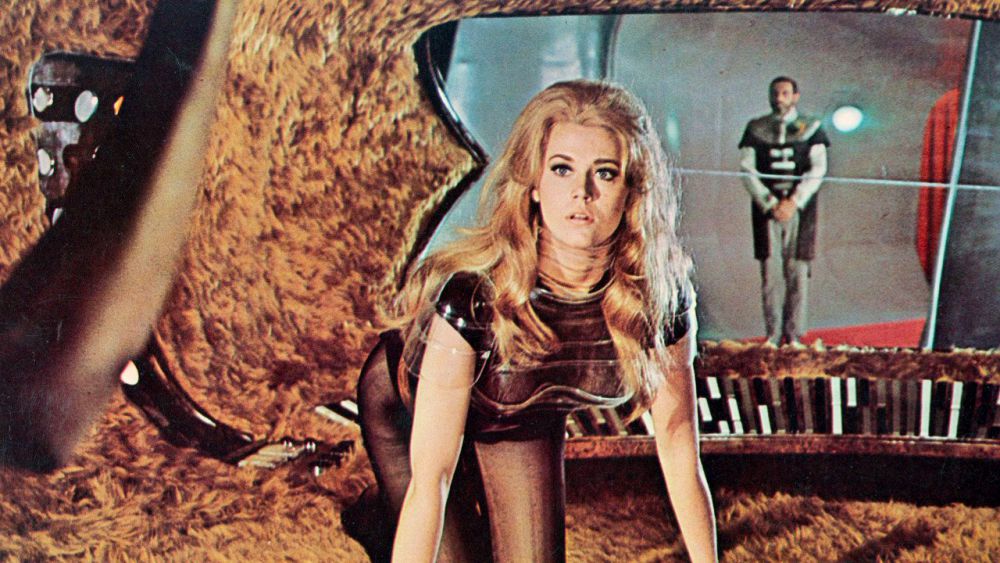 Barbarella: All You Need is Love

Barbarella defies all logic. A softcore pornographic (for its time) feature starring Hollywood royalty (Jane Fonda) at the height of flower power before the idealism of that movement was crushed under the wheels of the hell’s angels at Altamont. It’s a movie that could have only ever been released in 1968. It’s dated, barely directed, and its plotting leads viewers on a Dune-era David Lynch fever dream into a nonsensical narrative that makes no sense whatsoever, and yet, it has survived. Perhaps because it’s a fascinating touchstone into the career of Jane Fonda, whose acting choices following Barbarella lined up more frequently with her radical political beliefs. Or maybe its continued popularity is in large part due to Mario Garbuglia’s maximalist tendencies toward overdoing every piece of set direction and a filmmaking ethos that would lead one to believe that no idea was considered bad while making this picture. Barbarella is everything and nothing, a gunshot and a whisper, an Oakland Raiders jumpsuit and talking dolls, an angel who cums and a villain with a name synonymous with 1980s’ most popular boy band Duran Duran. See where I’m getting with this? Barbarella is fucking nuts, and that more than anything is probably why it has stayed in the public consciousness.

The plot as I stated before is nonsensical, but at its barest roots it’s about Barbarella: a heroine who landed in a foreign land and finds herself caught up in stopping the apocalyptic madman, Durand Durand (Milo O’ Shea). Barbarella subscribes to the idea that “love” is all, like the real life hippies of her time, but Durand Durand detests this, believing that love conquering all is a fascist obsession, so he sets out to destroy the world. Narratively, it’s sort of like Avengers: Infinity War if those movies had an ounce of style or sexuality instead of chastity by way of seemingly eternally undamaged spandex. Barbarella is obviously the superior film.

Aside from Barbarella’s overdriven Barbarella-ness, it’s also fascinating in the greater auteurism and acting decisions of Jane Fonda. Fonda works as the abstract figure in Barbarella making everything strange by her mere presence. She’s not supposed to be in a movie like this, but here she is—perfect hair, sequins in every corner of costuming, and grasping the glistening abs of a stupid hunk angel whose name is totally unimportant. Fonda being in this film would be like if John Wayne had agreed to be in a creature feature in the 1950s, and he fucked the monster. Her being here doesn’t make sense, and that’s where I enjoy Barbarella the most. She is an abstraction.

Fonda would never make another movie like this one, and that was probably the best decision for her, as she was dealing with an eating disorder at the time and she found Barbarella to be creatively unfulfilling in a political context. Peace and love is the only real message and, even in a political sense, this is the film’s only real leaning into something that could have been considered contextually, socially relevant. Aside from a few throwaway lines from Fonda like “why would anyone want to invent a weapon?” there’s little in the way of Fonda auteurism. It’s a curio picture in Fonda’s filmography, because afterward she would wander into the hands of Jean-Luc Godard and the Dziga Vertov group (for better or worse), work in tandem with the Black Panther Party, and openly protest the Vietnam war. Her acting choices at the time reflected her new radical views with movies like Klute (1971), Tout va Bien (1972), The China Syndrome (1979) and Coming Home (1979). All of these movies addressed real, heavy social problems such as sexual assault, the futility of the Vietnam war, class issues, and the women’s liberation movement. Barbarella, by comparison, seems simplistic, blunt, and worst of all stupid when placed beside these other films and modes of Fonda’s career. But I’m unsure if Fonda’s work in the 70s can get where it needs to be without Barbarella and its floofy, dippy love of naivete that also mirrors the peace and love generation. In this context, Barbarella makes perfect sense, because Barbarella is a mirror of 1968, before the shit hit the fan and Richard Nixon was elected president.

In 2018, Barbarella is an adrenaline rush of bad taste with no limits on what could be considered art and what was trash. There’s no differentiating between the two, and its cult classic status lives on, because everything in the movie is extra. Fur covered walls on the set? Great. Invisible keys to open invisible doors? Go for it. A madman sitting behind a computer desk trying to destroy the life of a woman he barely knows? Well, that one’s relevant, but the point of Barbarella is that like all culturally or artistically significant films of specific period’s there’s much to digest and there’s more than one way to approach the movie. Barbarella works if you’re obsessed with North America in the sixties or the political ramifications of Jane Fonda’s career, but if you’re watching it to ironically laugh at the camp elements or delight in Mario Garbuglia’s elaborate pleasures in bringing out the absurdities of having no taste, then you’ll also be right at home. Barbarella is eternally strange, but maybe that’s why its great.

Willow Maclay is a film critic/writer living in Newfoundland. She is the co-author of the upcoming book “Corpses, Fools and Monsters: An Examination of Transgender Cinema” and has written for outlets such as The Village Voice, Ebert Voices, Cleo: A Journal of Film & Feminism, and The Film Stage. Her writing can also be viewed on her own website: Curtsies and Hand Grenades.