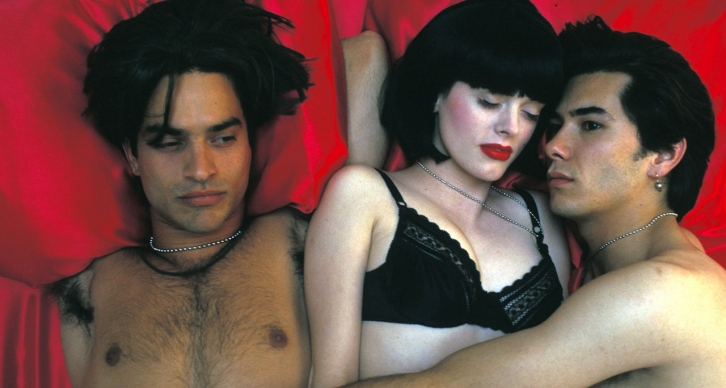 The Doom Generation: A Heterosexual Movie

If there’s anything immediately shocking about Gregg Araki’s 1995 film The Doom Generation, it’s not the sex, the mayhem, the whatever – it’s the way it’s billed: “A Heterosexual Movie.” That Araki, whose aggressively gay previous films brought a punk charge to the New Queer Cinema, would have his mainstream debut be a heterosexual movie seems, at worst, like a sellout move. And yet, among the various strands of subtext and satire is just that; America’s inherently violent heterosexuality and the repression that it creates.

Released the same year that AIDS-related deaths hit an all-time high and the FBI first started tracking hate crimes, the mood of the era is pervasive in The Doom Generation’s wasteland of stop-shops and theme motels. While AIDS mostly exists in passing in Araki’s Teen Apocalypse trilogy (Totally F****d Up, The Doom Generation, and Nowhere), the stigma of the disease and the climate of anti-LGBT hate and violence that it helped amplify is present throughout. This kind of violence is central to The Doom Generation, acting as the force that both kicks the plot into motion and abruptly ends it.

Both of these acts of violence occur during sexual encounters. The former happens when ostensibly straight teen Jordan White (James Duval) can’t get it up with his girlfriend, Amy White (Rose McGowan), out of fear of “catching AIDS,” and the latter at the exact moment in which the film’s homoerotic subtext is about to turn explicit. Though shocking, there’s an air of inevitability to this second instance of queer-bashing, an act of violent sexual repression that serves as the horrific punchline to the “Heterosexual Movie” setup.

It’s impossible to talk about these movies without bringing up Godard. Araki admits in his liner notes for Totally F****d Up that it was a deliberate attempt at recontextualizing the structure of Godard’s Masculin Féminin. That film, a sort of exposé of the youth culture in Paris, took the form of a constantly disrupted patchwork of interviews and story fragments in fifteen parts. In Araki’s film, the frequent interview scenes are replaced with camcorder footage shot by one of the film’s characters, blurring the line between fiction and documentary even more. In doing so, he allows his group of queer teens to take control of their own narrative in a way that more closely resembles an ACT UP activist video than yet another Hollywood teen coming-of-age movie. The Doom Generation takes this teen subjectivity one step further.

On the surface, The Doom Generation resembles the absurdist apocalypse of Godard’s Weekend, though the universe of Araki’s film is wholly derived from the perspective of its crystal-addled teen protagonists, not of its director. Its End Times-meets-Spencer’s Gifts version of Los Angeles almost seems conjured from Jordan’s queer subconscious. It’s a world that’s as hormonally charged as it is juvenile: his fears of “catching AIDS” and of his virgin girlfriend’s promiscuity manifesting itself in the form of a series of confrontations with supposedly spurned lovers, each man packing a pump action shotgun (used in one scene as a queered nod to Beyond the Valley of the Dolls) and each woman wielding a katana. In mixing the phallic with the patriotic and the satanic with the schlocky, Araki creates an aesthetic that can’t be divorced from its teen characters. It may be a heterosexual film, but the world that it depicts is undeniably queer.

Elizabeth Purchell is an occasional writer, archivist, and film programmer based in Austin, TX. She can be found on Twitter and Letterboxd at @schlockvalue.