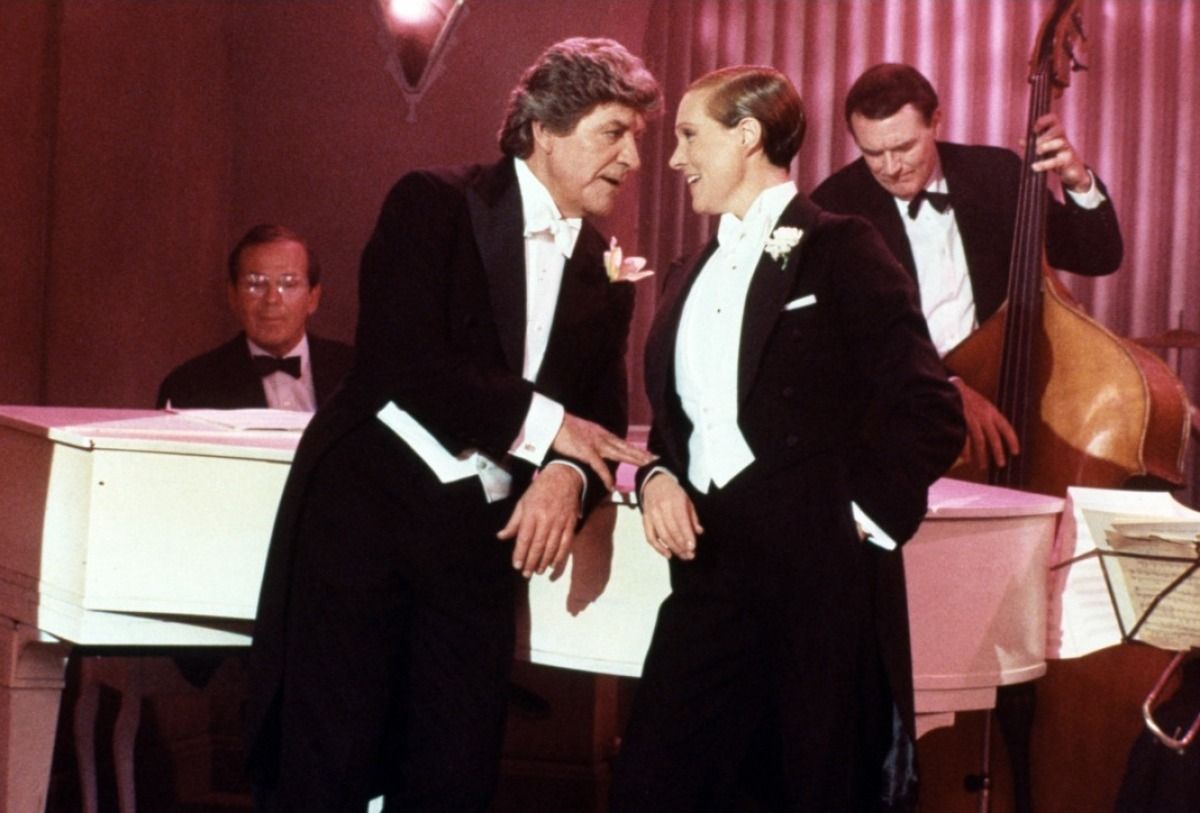 Victor/Victoria is a grand farce where the tensions of identity, fame, and power could easily have been twisted into something more dramatic in its 1930s Paris, France setting. But Blake Edwards instead has the confusion, anxieties, and subversive nature at the center of his story not as a double-crossing caper but instead a double-cross-dressing musical sex comedy. A film like Victor/Victoria that is so frank, fun, and hilarious about homosexuality, queer identity, androgyny, and patriarchal structures would appear to be strange bedfellows for the central performers, Julie Andrews and Robert Preston, who were and are associated with clean, family-friendly entertainment. So it is crucial to understand what led to Blake Edwards’ 1982 masterpiece. Victor/Victoria’s modernity and revisionism of the past was very much informed by how Edwards, Andrews, and Preston aligned themselves so well with the characters and their stories of past their prime performers returning to the fold, any way they can. Victor/Victoria is a story of self-reinvention where illusion and perception blur.

Victor/Victoria was years in the making with Edwards working on remaking the 1933 German film by Reinhold Schünzel, Viktor und Viktoria (that had other remakes not long after, first in France with 1934’s George and Georgette, then First a Girl in England in 1935, and Victor and Victoria in 1957 in West Germany) since the late 1970s.  Throughout the 1970s, Edwards was rehabilitating his reputation as a major film director after his misbegotten 1970 musical comedy, Darling Lili, his first film with then new bride Julie Andrews, nearly put Paramount Pictures into financial ruin. His subsequent films after, the western The Wild Rovers and the social thriller The Carey Treatment, both faced massive studio interference in editing and revised endings that led to Edwards disowning The Wild Rovers and feeling generally wounded about both experiences. He made a Cold War drama in The Tamarind Seed that did respectably enough and three Pink Panther sequels, riding on formula that did good business rather than artistically make acclaimed comedies in that period in the way Hal Ashby, Woody Allen, and Robert Altman films were. But then Edwards got his comeback with the major hit with 10, a vehicle for Dudley Moore and Bo Derek’s cornrows and beach body. And then came S.O.B. in 1982, a rollicking, hilarious, poisoned pen Hollywood satire of sleaze and Edwards riffing on the difficulties he faced a decade before in this behind the curtain show business comedy. S.O.B. paired Julie Andrews and Robert Preston first prior to Victor/Victoria and if you thought Andrews’ Victoria and Preston’s gay Toddy were transgressive for their Mary Poppins and The Music Man iconography, in S.O.B. there is a musical number where Andrews becomes topless from being as high as a kite due to a Dr. Feelgood shot from Preston’s smutty mustachioed physician who dresses like he wants to be on the cover of Mandate magazine—but is at least two decades too late.

Edwards, along with Andrews and Preston (who Edwards tabbed for Toddy after his original choice Peter Sellers died in 1980), by the making of Victor/Victoria had guilelessness and no fear of subverting their wholesome images. Hollywood had changed beyond recognition and rather than be defeated, they made a film that carved out its own space in what they did best, with a twist and emancipation that expanded on the possibilities of content and performance just like their characters in the film. But of course Victor/Victoria has much more than meta-narrative going on.

The first scene of Victor/Victoria is Preston’s Carroll ‘Toddy’ Todd having a very adult quarrel with his male gigolo, Richard, who gets dressed and prepares to leave from a night together as Toddy is still in bed. The details of their arrangement feel in constant negotiation—well, at least for one of them. This is Toddy’s world that he cannot be open about beyond his doors as far as sex and intimacy go. When he takes in Julie Andrews’ Victoria Grant, who had been unable to get any jobs anywhere as a nightclub singer, she’s down on her luck but not without resourcefulness and strong instincts. This comes out when she defends Toddy from the gigolo’s insults later by punching the gigolo, while in male clothing, due to her own clothing being destroyed. And then a light bulb goes off in Toddy’s mind. Toddy, himself a cabaret performer, presents to Victoria an idea that her act be crafted as a man who is a female impersonator in order for her to get gigs and shows in Paris. Victoria questions if this can work. Toddy’s reasoning is that it is so preposterous, a woman pretending to be a man impersonating a woman, that nobody will believe it and states the crucial line of the film, “People believe what they see.”

Toddy should know, his broad-shouldered body, baritone voiced, coded masculine, helped build a glass closet around him, and does protect him in a highly discriminatory environment. Of course he gets to perform “Gay Paree” at the nightclub Chez Lui and when given the chance to be open about being gay, whether with Victoria or Lesley Ann Warren’s delightful ditz Norma Cassidy, he is so candidly. There are spaces where he can be out, open, and also coy. But for Victoria, becoming Victor—a Polish Count who has taken to female impersonating, a hit nightclub performer who can sing soprano—is to pull off a high-wire act. Toddy coaches her—and in crafting the persona poses as the lover of Victor—in a Pygmalion meets Tea and Sympathy “manning up” leading up to her debut. The act is to perform as female in the “Le Jazz Hot” number (not as the real Victoria), remove her wig (an aspect of femininity), and ‘come out’ as Victor as the big reveal, making the curtain call itself an extension of the performance. When the audience watches it unfold, their applause turn into rapturous ovations and Victoria becomes a sensation as a Victor because the twist of gender bending offered the unexpected and unique to the audience. They were, of course, seeing gender bending, just not the kind that they thought. But that doesn’t matter—it’s what they believed to have seen that matters.

The dramatic irony for Victor/Victoria is that the viewer knows everything going on with Victoria and Toddy’s plans, way ahead of the other major characters in the film and the nightclub. However, Edwards does not have that stand for the entire runtime. He presents a performance at Chez Lui where performers have one side of them of feminine dresses and caked makeup while the other side of them are in masculine tuxedos and with facial hair. What side is ‘real’ versus fake is left unclear to the audience both at Chez Lui and anybody watching Victor/Victoria. And in capturing people in the background of the film, Edwards shows diversity in sexuality and gender expression that makes James Garner’s King Marchand’s insistence and affirmation in wanting a stricter binary come off deservedly narrow-minded. His suspicions on Victoria are correct, but that does not mean he was not challenged, catching himself falling in love with androgyny, which came as a shock to him.  Victor/Victoria is playful in its queer-positivity but it goes beyond farce. The film dives into serious discussions among characters on sexual identity and what it means to be putting on an act versus it being what other people see but do not know. Edwards makes Victoria Grant more than a second-rate soprano and first-rate imposter. She’s a stick of dynamite that changes the worlds and awareness of multiple characters in how they relate their sexuality in public, while mindful of how the world will look back on them.

Sure, Julie Andrews with a suit, tie, and short hair would still likely not fool anybody in a non-film context, but she would also not be fooling anybody as being a Polish Count Victor Grazinski either (so goes the quip of a gay chorus boy, ‘If he’s a Polish count, then I am Greta Garbo!’). And the idea that a glass-breaking soprano could be slumming it as Victoria Grant does at the start stretches believability. But Victor/Victoria, with Edwards’ expert wide shots of chaotic physical comedy and elaborate musical performance (aided by Henry Mancini and Leslie Briscusse’s cheeky original music and lyrics) and Andrews and Preston (although his feathered hair is an anachronistic touch that puts the film slightly out of time) as a heavenly musical-comedy pairing, you believe what you see because it is hilarious, fun, and clever.

Caden Mark Gardner is a freelance film writer based in Schenectady, NY. He is collaborating with fellow film critic Willow Maclay on the history of depiction and representation of transgender people in film for an upcoming book called Corpses, Fools, & Monsters: An Examination of Transgender Cinema.