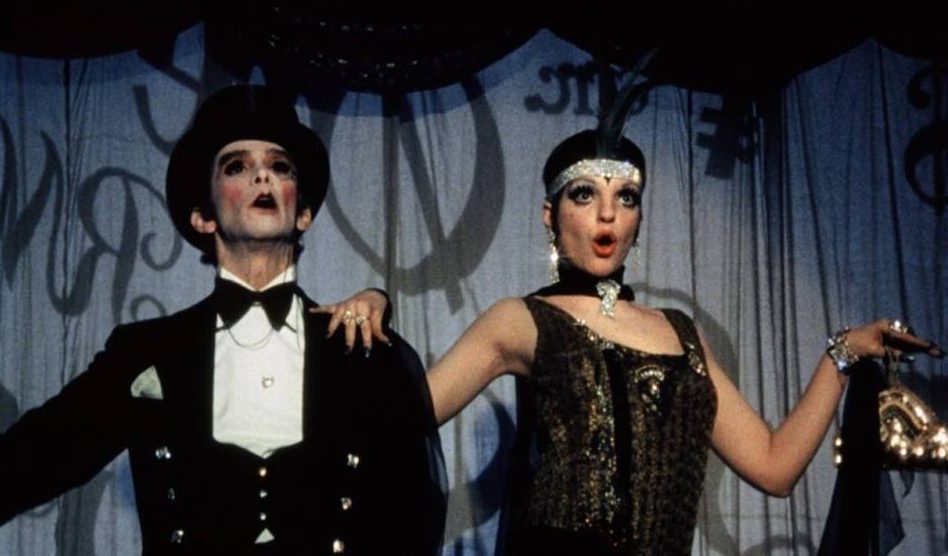 I Me Mein Herr: Cabaret, Queerness, and Gender

There is little difference between Helmet Berger’s sexually deviant, amoral political strategist Martin (Helmut Burger), dressed up as Marlene Dietrich in stockings and pencil thin eyebrows drawn on, in Luchino Visconti’s The Damned and Joel Grey’s implicitly sadistic harlequin Master of Ceremonies in Bob Fosse’s adaptation of John Kander and Fred Ebb’s musical adaptation of Christopher Isherwood’s The Berlin Stories, playfully called Cabaret. Though it came three years before, Luchino Visconti’s The Damned (1969) would whet some appetites when it came to unearthing a public fascination with the blurring of gender, the exploitation of camp, and the appeal of the homoerotics of fascism. Martin, the Essenbeck’s scheming queer of a nephew, luxuriates in how twisted he is, how hot he is, and he revels in his ability to make fascism fodder for camp, the plaything of un/ironic eroticism. His outfit and performance reads as, “Exterminate me, daddy.” And it’s not hard to picture Berger, in drag, waving his hand, saying in a sing song German accent, “Divine decadence, darling.” Joel Grey’s Emcee isn’t nearly as sexy, or overtly sexual, but he’s playing the same game with the audience. He is the impossible to reconcile—someone who can distract from, perpetuate, and be victim of fascism—and his maleness a key ingredient to this. But what does maleness have to do with Cabaret anyways?

Maleness, like femaleness, like gender, like wealth and ethnicity and politics, is a performance. Indeed, it is spectacle. In this particular case, the Master of Ceremonies isn’t just male: he is in a kind of drag, his face smothered in white makeup and auburn lipstick. His suit is too tight and too loose, like a nod to Charlie Chaplin, and his hair is slicked back, which makes his head shape seem more skull like. His eyes are wild. He pantomimes the role of a host. He’s in drag as sleepy heterosexual male in “Two Ladies”, as anti-Semitic romantic in “If You Could See Her”. He is more literally in drag, later in  the film, dressed as a one of the chorus girls, who are collectively dressed as both mountain ladies and Nazis. The Emcee’s face isn’t so different from the Joker’s—the smile almost sliced into his face, the amber stained teeth yellow like the bright lights poor Sally Bowles craves to be underneath.

The Emcee’s fascist aesthetic is curious, paradoxical, especially with the life and afterlife of Cabaret. Hal Prince noted that the character was inspired by a real Master of Ceremonies he saw in Berlin prior to the first production of the show in the 1960s, caked in rouge and lipstick to hide his age. Cabaret, first produced on Broadway in 1966 was an adaptation of John Van Druten’s play I Am a Camera (1951), itself an adaptation of Christopher Isherwood’s Goodbye to Berlin, his semi autobiographical novel from 1939, describing a pre-war Weimar Republic. The process of adaptation from one medium to the next (another musical was to be made of Van Druten’s play by Sandy Wilson) meant, inevitably, that things were dropped, changed, and, maybe most importantly, straightened. In Prince’s Broadway musical, Cliff is a heterosexual American, making his resistance towards Sally’s advances one more of pride. And though Cabaret was still potent in its own right, when Bob Fosse took interest in adapting the musical to film, he and his team went out of their way to hew closer to the source material of Isherwood’s Berlin Stories; Fosse could be dirtier, seedier, and queerer. Brian, now an Englishman played by twinky Michael York, could now be a little more impish, a little less inclined to clutch his pearls at what went on in this society. He could be bisexual. Brian could be closer to who Isherwood actually was, without having to totally dequeer the thing.

Additionally, this meant that Fosse could employ cinematic techniques to craft why exactly the Emcee was such a bizarre, ghoulish character. His performance is built fundamentally on the lie of safety, jocular and clown like, but happy to do the goose step (as satire?) during “Tiller Girls”. The camera glides through the legs onstage to reveal the Emcee and his dancers tap/goose step around the cramped stage. His is opportunism as entertainment. After Joel Grey’s Tony and Oscar wins, Sam Mendes and Rob Marshall would revamp the show in 1998 and actor Alan Cumming would make his own stamp on the show. The revival was one of the first major examples of a tacitly immersive theatre experience, the Studio 54 venue fashioned to be the Kit Kat Club of the musical, and the servers’ costumes amplifying the delipidated nature of the locale. That iteration combined elements of the original musical and the film and, most notably, made the Emcee more explicitly queer. He only wore suspenders and looked like a coked out Billy Joe Armstrong, and more attention was paid to the makeup on his nipples than on his emo reminiscent face. There is eroticism here, temptation. When he says, “Ladies and gentlemen”, he pauses, leaving an ellipsis after “ladies and”, and transitions into a girlish titter, a coquettish rendering of “gentlemen”. Crucially, what Mendes’ adaptation does is change the ending; the finale version of “Willkommen” doesn’t just imply Nazi takeover, but transforms the stage into the gates of Auschwitz. The Emcee finally puts on some clothes… the striped prisoner’s uniform. He turns around and exits into bright white light, and on his back is a pink triangle, a signifier of homosexuality during the Holocaust. And then black.

Which is to say, even if Cabaret the film doesn’t go as far as Mendes’ revival, its maleness is as important as its femaleness. Isherwood, and Fosse, weren’t just looking at the broad umbrella of straight white men. Cabaret is not only about the slow rise of fascism and the complicity that allowed it to happen, but about the implications of how fascism would affect those on the margins: queer people, Jewish people, women. “Tomorrow Belongs to Me” is so chilling, so nerve frying, precisely because of how normal it is, how it seems to spring from nowhere and everywhere, the voice of one Nazi youth growing to be the entire throng. An entire nation. And  Fosse intentionally shoots this scene as both capable of inducing fear as well as arousal: the boy brown coat is a pristine example of the Aryan race, soft enough to be adored and studious, beautiful in his uniformity, and hard enough to destroy the lives of others. His performance was politics. Claims of the film being “annoyingly male” misread who the subjects are, and read as latently homophobic. The Weimar Republic was where art and outsiders could flourish. But it was destroyed. The film suggests that performance wasn’t enough to keep anyone safe.

That Sally tries to lose herself on the stage, away from reality, in the hopes of becoming a movie star, is its own little tragedy. “Divine decadence, daring,” she tells Brian. Isherwood is simultaneously tender and cruel in his depiction of Sally, but Fosse imbues the film with more empathy. While Isherwood, and Prince, stayed with Sally being of no talent, Fosse’s decision to cast Liza Minnelli creates its own particular arc. Here is a flighty woman of little to no money or work ethic (though it’s implied her diplomat father, absent, is rich) whose privilege can only get her so far, her Lulu-reminiscent bob augmenting her devil may care attitude. But she is really a star. Just watch her perform any number—“Mein Herr” or “Maybe This Time”—and she is legitimately a star, born to be on the stage, on the screen, in front of audiences. She’s willing to perform for anyone, be it a stage full of random Berliners, or Nazis, or Brian. Divine decadence, darling. But she’ll never escape. “Life is a cabaret, old chum!” is just a way for her to process the trauma of abortion, of the shifting political landscape.

While scholar Linda Mizejewski, author of Divine Decade: Fascism, Female Spectacle, and the Makings of Sally Bowles argues that each iteration of Sally and her dynamic with a scholar duplicates the very ideologies and politics it condemns and critiques, it is nevertheless difficult for students of camp not to be drawn to her, even if she is paradoxically a metaphorical representation of both gender/sexual difference and fascism. If anything, queerness, at its best and worst, epitomizes that hard to swallow contradiction.

That Sally believes she is talented and stuck within what will become a deeply oppressive society that she cannot find shelter from must certainly be a reason why queer men are inclined to identify with her. “Do I shock you?” she asks Brian. No, nor us, precisely because we know her. Even at their most complicit, queer men are aware of the ways in which they must perform to survive, even if that is not enough. She can wave her emerald nails, expertly filed into shape, but what will become of Sally Bowles?

The difference between Sally and the Emcee is a choice of vulnerability, performative or otherwise. It’s not enough to say that the stage performances at the Kit Kat Club mirror or are somehow metaphorical or allegorical to what is “going on” in the world outside, because that would be too easy for Fosse. Rather, it’s a matter of who they’re playing and for whom. Both Sally and the Emcee are happy to be submerged, maybe trapped, in the persona they’ve crafted for themselves, and for Sally, that flighty emotional ambiguity exists on stage and off. The Emcee is just our worst impulses: happy to entertain and be entertained and to submit to power, at the cost of other people. Maybe that’s Sally’s problem; she can’t discern what’s a stage and not, and when the decadence stops being so divine.

Kyle Turner is a freelance writer based in Brooklyn, NY. He is a contributor to Paste Magazine, and his work has been published in Slate, The Village Voice, and Esquire. He is relieved to know that he is not a golem.