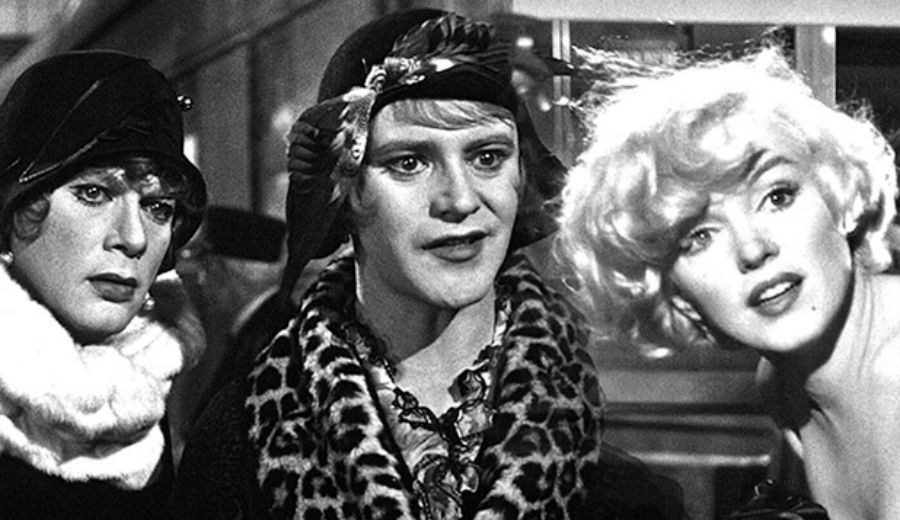 “I can never have children!”

“We can adopt some.”

There was a fixture in my childhood, a figure ever-present on screen through the years I was learning to see the world around me. Her name was Marilyn Monroe. In my house we loved our VCR (and later DVD); movies going when cooking, playing dress up, basically any occasion. If the TV was on and we weren’t watching The Simpsons or Seinfeld, we were most likely watching a movie, even just peripherally. That’s the thing about my house. Even now, regardless of the time of day or activity, whether it’s 7:30 am on a Saturday or after Boxing Day lunch, we probably have a movie playing in the background.

These days the rotations vary a bit more, ranging from rom-com mainstays like Notting Hill and long-forgotten indies like Dan in Real Life, to tearjerkers like Life is Beautiful and off-the-wall family favourites like Up in the Air (I don’t know how that became the movie of my family, quoted at all times of day, it just did). There are dramas, romances, war movies, and more, especially musicals (and, basically, anything but horror). Back when I was a kid though, it was all Hollywood’s Golden Age, from Fred Astaire to Grace Kelly to Katharine Hepburn to Howard Keel. Marilyn was a frequent visitor, whether with Jane Russell in Gentlemen Prefer Blondes, Lauren Bacall and Betty Grable in How to Marry a Millionaire, or listening to Tom Ewell play Rachmaninoff in The Seven Year Itch (an association I’ll never erase).

I can’t remember when I first saw Some Like It Hot. Maybe it was at home on the couch one Saturday afternoon, courtesy of a crackling VCR one day at home before I started school, or at the house of a great uncle who had every Golden Age of Hollywood movie you could think of, where we’d have movie nights while eating fish and chips. This 1959 Billy Wilder joint has become an inextricable part of not only my childhood, but of my present day, remaining a favorite despite the countless mornings, noons, and nights I have spent watching it. Some Like It Hot arrived in my life somewhere in my early, early years, of Marilyn movies and musicals.

Of course, it’s those formative experiences and movies from decades different from my own, watched and rewatched throughout the years, that inform who I am today. It’s those early encounters with what can be called ‘queer cinema’ in broad definition and interpretation, and how Hollywood interacted with sexuality in a time where it had to be contained in sly remarks and strategic cigarette smoking, that I remember today. They were a valuable ground for testing the waters, where I would observe how my family responded to them, and how they made me feel. Today, they’re a reminder of where I came from. Back then, they were a safe zone.

This is true for most queer people, especially when you grow up in a household where movies are present in many day-to-day activities. Cinema becomes shorthand, a way to express and experiment with what we cannot. Because, you see, if there’s a theme to how I may have watched Some Like It Hot for the first time – and admittedly, still end up rewatching it a lot – it’s with family. Themes of queerness are easily found in this film, where two musicians (Jack Lemmon as Jerry/Daphne and Tony Curtis as Joe/Josephine) disguise themselves to join an all-female band to evade the mob and encounter some complications. Monroe, as ukulele player and singer Sugar, is of course one of them.

Like many of her films, what has cemented her as an icon in queer culture is evident here. Damsels are her common character type, running from hateful figures of masculinity and a society that spurns her or refuses to take care of her. “Story of my life. I always get the fuzzy end of the lollipop,” she famously says in Some Like It Hot. She’s a misfit, always on the run. But like Monroe herself, she is always ready for a reinvention, casting off her former self to become anew on demand. It’s a movie about the freedom of a new place and self, hiding behind disguises to experiment and be free. What else could be more relevant?

The film is a sex comedy that pushes the limits of of those Hays Code days, complete with jokes about sexual tension between the lead characters, and an extended innuendo made by a billionaire alter ego played by Curtis about his inability to feel attraction to women. “I never knew it could be like this!” he exclaims after a steamy kiss from Monroe. The other complication is Jerry’s growing flirtation with elderly playboy Osgood, who quickly proposes marriage to an enthusiastic reception. Joe may ask, “Why would a guy wanna marry a guy?”, but for Jerry the answer is simple: love, diamonds, a honeymoon at Niagara Falls or the Riviera! The film, thankfully, presents scant rebuttal to this. The ending is adored for a reason, as surprising as it is heartwarming. Jerry removes the wig, but Osgood nonchalantly reconfirms his love regardless of what has just transpired, ready for them to still ride off into the sunset together.

To watch a film like Some Like It Hot with such blatant queerness from a young age is to feel affirmation to some extent, even if only for a moment. It’s a family favourite watched again and again, where you hear laughter at all the right moments and talk freely about it after. Despite uncertainty in many other situations in day to day life, where simple remarks bristle uncomfortably, this is one source of comfort. It’s where queerness is understood, even if inadvertently. And even though you can’t quite put a name on what it is you feel yet, those sounds of enjoyment feed some sense of happiness and contentment, that perhaps they will understand you. Here is a template for understanding and empathy, a cinematic conversation that is just as important to me now as it was when I first saw it. “None of that, Sugar,” Josephine says. “No guy is worth it.”

Ella Donald is a journalist, academic, and critic from Brisbane, Australia. She writes for magazines, newspapers, and websites both nationally and internationally, including GQ, Vanity Fair, The Guardian, Vice, and them. Talk to her about Todd Haynes, gymnastics, and pepperoni pizza @ellafdonald on Twitter.