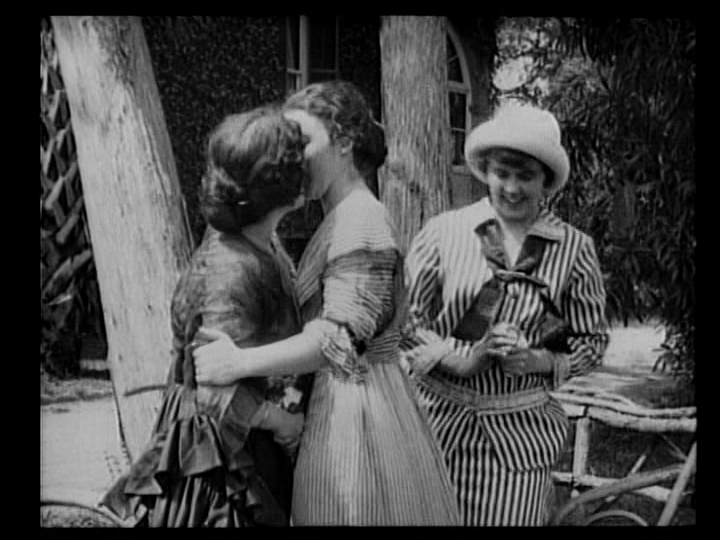 Sidney Drew’s 1914 landmark silent gender bender comedy, A Florida Enchantment, is likely only canonized due to it being one of the first of its kind, but that, in and of itself, is nothing to minimize. Over one hundred years old, it would have been downright absurd to see same sex affection, whether kissing or something as benign as cross-dressing. As such, the film plays these events for comedy and later disgust, but that doesn’t negate the images of homosexual characters in and of itself. It’s similar in that regard to Alice Guy Blaché’s earlier short film, The Consequences of Feminism (1904), in the sense that the message itself is hidden under a veneer of comedy and its social implications are sly and understated. The images are still there even if the film asks viewers from a logical standpoint to see it from a paradoxical position of reversed social status. In Blaché’s film, when women take up the social responsibilities and gender roles of men and men do the same for women, it’s all played for laughs, but in doing so the limitations of a woman’s life inside the house were brought to light, even if they were minimized due to the social configuration of the time and the classification of the short film as a comedy.

A Florida Enchantment works in a similar vein when Lillian Travers (Edith Storey) becomes a man through a mystical gender swapping seed. In truth she becomes a butch lesbian, but in casting off the shackles of her stereotypical femininity she unlocks herself. She dons a cap and suit and flirts with the girls just like any other man, going as far as to kiss a few, and when with the boys she’s just as rowdy as any one of them. It’s all played for laughs, but here in this film is a woman kissing another woman, and there isn’t outrage and disgust, but something resonant that could only be called culture. It’s transgressive, though the film still ends up being in step with the times in a few other examples dating it as a cultural relic, even if it is incendiary in other ways.

When Frederick Cassadene (Sidney Drew) takes the seed after Lillian (now Lawrence) eggs him on, he becomes a woman, but he makes a much less convincing woman than Lillian ever did a man and doesn’t blend into society. When he eventually dons a dress and flirts the boys, he’s chased out of town. They call for the cops and poor Frederick ends up jumping into a river just for solace. Poor girl didn’t even stand a chance. This is sadly still reminiscent of our times. Femininity is damned and the image of the castrated male is met with anxiety and revulsion. This is where the film comes into its transgender allegory and importance: to be seen is both a tool of power and one of danger. Frederick doesn’t look how a woman is supposed to look with his hairy arms, square hips, and gentleman’s height, but after taking the seed he embodies his inner femininity and wants it to be confirmed by society at large. They reject him. In that sense the film still feels relevant rather than stuck in its silent age, and that’s where the film likely still holds any power beyond a cultural artifact. It’s a starting point of transmisogyny, not because it damns this character and makes him out to be a fool, but because it was already ingrained in the bones of society.

Even in mentioning these more powerful elements the film still doesn’t relinquish itself as something that should be freed from cinema’s vaults beyond a history project, because of its copious usage of blackface and minstrel tropes. When watching films from this period, and any cinema of the past, it is important to look these moments of failure dead in the eye and realize that these racist tropes existed. To act as if they didn’t would be offensive and to pretend that racism never existed in the first place when it’s still very much in the blood of our society, even if we pretend things are exponentially better. A Florida Enchantment is a film which is both progressive and regressive in equal measure; an interesting time capsule of a time when LGBT representation was relegated to the fantastical or the comedic rather than human. The film has images both damaging, and inspiring, and viewers have to reckon with both.

Willow Maclay is a film critic/writer living in Newfoundland. She is the co-author of the upcoming book “Corpses, Fools and Monsters: An Examination of Transgender Cinema” and has written for outlets such as The Village Voice, Ebert Voices, Cleo: A Journal of Film & Feminism, and The Film Stage. Her writing can also be viewed on her own website: Curtsies and Hand Grenades.